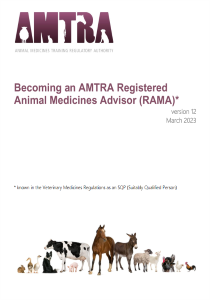 A Registered Animal Medicines Advisor (RAMA) is the name AMTRA gives to those people described as SQPs (Suitably Qualified Persons) by the Veterinary Medicines Regulations. The second is the legal term for the time being, though that might change in future, but the first describes the role better and is the name we are increasingly choosing to use in preference to SQP. However, you will continue to encounter the term “SQP” sometimes, including in some AMTRA documentation, and should regard it as equivalent to RAMA.

Registered Animal Medicines Advisors have an important and responsible role, contributing to animal health and, in the case of farm livestock, farm profitability. They are entitled to prescribe and/or supply certain veterinary medicines under the Veterinary Medicines Regulations, but to do so must act professionally including following the rules of the Regulations and of an associated Code of Practice.

AMTRA RAMAs work in a variety of work environments – typically in veterinary practices, in agricultural or equine businesses, or in pet shops, but we have RAMAs working for pharmaceutical companies, government, universities, charities, zoos, laboratories, the army and less obvious places. They can deal with customers face-to-face or via the telephone or Internet, but the legal and professional obligations remain the same.

Becoming an AMTRA RAMA requires passing both written and oral assessments, but that is not the end of the process: being an AMTRA RAMA means an ongoing commitment, acting responsibly, following the rules in the Regulations and Code of Practice, advising animal owners on choice of medicine and their safe and effective use, as well as other strategies, contributing to the health and welfare of their animals. There is also a requirement to do some ongoing learning known as CPD (continuing professional development) and to pay an annual fee to remain on the AMTRA Register of RAMAs (SQPs).

AMTRA RAMAs are subject to disciplinary processes where we have reports of alleged noncompliance with the rules, and if found in breach can have action ranging from a letter of guidance through to permanent removal from the register of RAMAs (SQPs).

Some people working towards becoming an AMTRA RAMA participate in an external training course provided by a third party, which could be face-to-face or online. Others get support from their employer, and some study solely from the AMTRA training material – the printed manual and online. Everything you need should be in the information from AMTRA. Most people find external training support very helpful but it is supplementary and not required – the decision is yours.

Whatever learning route you take, it is important that you have enrolled as a student RAMA with AMTRA, and that when ready you book your assessments (both written and oral) with AMTRA – booking a training course with an external provider is not the same as either of these steps.